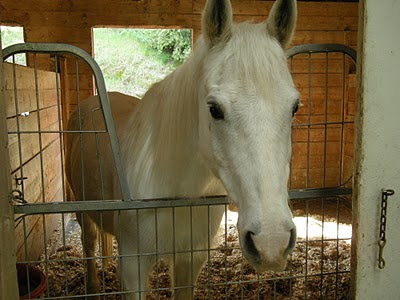 Look who is in the stall next to Baghdad at the new stable.
Someone had named him Jazzy after he had been dropped off at Bollinger Ranch for a lady to "try him out" as an endurance horse.  The lady had decided that he was "no good" and as the people who'd dropped him off no longer wanted him, he was slated to go to auction on Thursday, March 4th.  As he is 20 years old, it would be a miracle if anyone outbid the "killer buyers" who buy horses to be inhumanely trucked to Mexico for slaughter.  Hence, we knew the auction would be a death sentence for him.
Lisa Robinson, my trainer, had just pulled into Bollinger Ranch with my horse, Baghdad, in the trailer she was towing behind her truck.  I had followed in my car and pulled in behind her.  As we were unloading Baghdad, we were approached immediately by Cheryl L., the owner of BR, with, "Lisa, I want you to take a look at a horse!"  As I walked Baghdad around the front area of the barn so he could get acquainted with his new home, Lisa followed Cheryl into the barn.
By the time Bags and I caught up with Lisa, Cheryl had Jazzy out of his stall and was leading him, talking all the time.  "She said his hocks are bad.  What do you think, Lisa?"
Lisa watched as Cheryl led him away.  "He's fine; he's got some play but he's an Arab.  That's normal for Arabs."
Cheryl pressed on.  "She said he's no good to ride, and she doesn't want him.  I'm very upset that he's going to auction the day after tomorrow."
As Bags and I continued out the other end of the barn on our "get acquainted tour", I saw that Jazzy was being saddled.  In a few minutes, Lisa was on him in the covered arena, with Cheryl on the rail.
"She said he throws his head up, and he takes off on her," Cheryl continued as Lisa urged Jazzy forward - and he took off running.  Lisa, naturally, had no problem riding him.

"Lisa, you've got a Velcro seat!" Cheryl called out as Lisa effortlessly rode the furry white Arabian racing around the arena.  She let him run rather than fight him.

"He's just scared," she said, as she gently guided his head into a lower position by wiggling first the right and then the left rein.  As he gradually realized that no one was kicking him forward, he began to respond to Lisa's expert handling, and he gradually slowed down and relaxed.

Cheryl finally proposed to Lisa that they put their talents together and "save" Jazzy.  Lisa said she would work with him for a month on the mornings she came out to ride with Baghdad and I; Cheryl would be donating a stall, which meant no reimbursement for his hay and shavings.  My contribution would be to care for him every day, grooming him and turning him out of his stall each day.