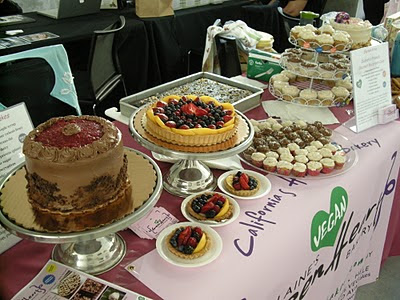 
This green event took place on Sunday, May 2nd at the David Brower Center in Berkeley.  There were 22 tables which included some really great products by young entrepreneurs.  I just wish there had been more attendees, even though I had a great time because 9 people I'd invited did come.  That meant that a lot of my friends received tarts, pieces of cakes, cupcakes, brownies, cookies during the following week.

Check out this great write up from Anneli Rufus in the East Bay Express:

That is the incredible vegan chef, Kim Brown, who drove from Suisun to see me!
She is always a wealth of information.
Posted by Alaine at 11:27 PM